Posted at 14:58h in news by Michelle Lamantia 0 Comments
0 Likes 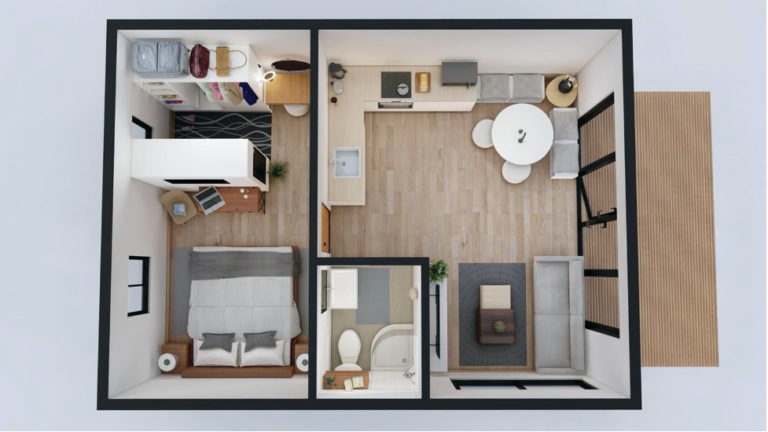 BIG LIVING IN A SMALL SPACE: A bird’s eye view of the floor plan of a Rohe Lotus tiny home. 800 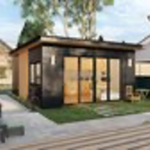 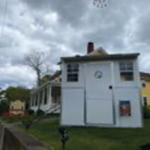 Across the state, there are approximately 325 unsheltered individuals living on the streets, in a car, in encampments, or other spaces not meant for human habitation.

Because of the COVID restrictions, 146 shelter beds have been removed from the emergency shelter system due to physical distancing requirements; however, the need for shelter beds has quadrupled since the start of the pandemic.

The pandemic has only exasperated Rhode Island’s affordable housing crisis.

To combat the crisis, housing justice advocates are pushing for the construction of tiny houses, small structures with only a few hundred square feet of living space.

The solution of tiny houses has been presented by Renew Rhode Island, a coalition of over 150 grassroots organizations, Lt. Gov. Sabina Matos, and local organizations like House of Hope.

This past January, the House of Hope received a tiny house from Pallet Shelter, a Washington based company. The emergency COVID housing opportunities (ECHO) are a collection of tiny houses, roughly 400 square feet to serve as temporary shelter for those experiencing homelessness.

Laura Jaworski, executive director for House of Hope, explained the tiny house journey began a few years ago, when the organization had the opportunity to work with the United Way and the Social Enterprise Greenhouse.

“Many folks are intrigued in tiny houses, and some even generationally grew up in a small, post-war bungalow,” she said in an interview on Wednesday. “The people we serve are the chronically homeless, and are also often faced with significant challenges. Perhaps they’ve never lived in a space of their own, or the spaces they’ve lived in are largely institutional. For these folks, living in a big space may be overwhelming.”

The House of Hope began working on securing a site for permanent supportive housing prior to the COVID pandemic. When the pandemic hit, House of Hope staff had to pivot from being housing advocates to “ad hoc public health workers,” said Jaworski. Now, the organization is looking to resume the housing projects.

“These are temporary tiny houses, just personal sleeping enclosures,” she said. “They provide a rapid opportunity for folks who are sleeping on the streets, in a car, or in a tent to rapidly come into shelter and have a safe space to sleep. There’s no fear of theft or violence or law enforcement. Affordable housing like this is a core solution for many of our constituents.”

The Pallet tiny houses are made of fiberglass PVC, and each has two to four bunks. They can be heated and cooled, and assembled in 30 minutes or less with minimal tools, no engineering degree required.

“It’s like if FEMA and IKEA had a baby,” said Jaworski.

House of Hope’s goal is to establish an indoor space for 30 of the ECHO tiny houses. Jaworski and other advocates are working alongside the city of Providence to secure such a location.

The ECHO Village would not charge shelter guests a rental fee or usage charge, but instead provide a safe space that folks can return to throughout the day or until they’re ready to move on.

“In most shelters, you have to leave every day early in the morning, take all your items, and you’re not guaranteed a space upon return,” explained Jaworski.

The ECHO Village will have parameters for community safety, and provide guests with hygiene facilities, some meals, and 24/7 access to support staff.

Jaworksi says it’s important for the shelter guests to see themselves reflected in the people they are served by. The House of Hope hires those that have experience with homelessness to provide more authentic services to those in need.

“Housing is interconnected and where everything begins. Without housing, school doesn’t work, work doesn’t work, and wellness or daily living doesn’t work. Everyone deserves dignity and safety,” said Jaworski. “Housing is a basic human right everyone is entitled to.”

Jaworski believes that statewide affordable housing cannot be achieved unless there is dedicated involvement from political figures. “Whenever there is political will, there will quickly become a way,” she said.

Speaker of the House K. Joseph Shekarchi introduced a package of bills concerning housing in late March. The first bill, creates a legislative commission to study all aspects of land use, preservation, development, production, and zoning. The commission would be able to make recommendations to enable the state to ensure and promote land use that allows for sustainable and equitable economic growth in support of efforts to achieve the state’s affordable housing goals. The second bill creates a commission to study the Rhode Island Low and Moderate Income Housing Act to study the ways to meet the state’s affordable housing challenges. The House passed both bills.

These bills address the issue of zoning to allow for the construction of tiny houses.

While Jaworski feels that this legislation is a step in the right direction, she is fighting for more comprehensive policies.

“We can’t build temporary homes and then wash our hands of the issue,” she said. “There are really important ways tiny homes can address a solution, but we need to be really thoughtful about how it works. The cause of housing insecurity isn’t just the lack of houses, there’s no policy.”

She pointed out other states that have partnered with local nonprofits to offer incentives for those who convert garages or shed into shelter for those experiencing homelessness, which is a possible solution for Rhode Island.

Jaworski is apprehensive of some policies that may benefit wealthier communities, and not reach the homeless.

“You have to find a homeowner who would agree to constructing a tiny home on their property, and those with the means to do so live in wealthier communities,” she said. “It will never really hit the folks at the low and moderate income range. The common denominator is that comprehensive language changes would be beneficial.”

Lieutenant Governor Sabina Matos is championing affordable hosing across the state with plans to meet the housing needs of individual communities.

Jaworski previously worked alongside Matos when she was Providence City Council President, and looks forward to resuming their discussions about affordable housing.

Jaworski, like Matos, believes that there isn’t one specific solution to the housing crisis.

“The idea of one size fits all is a double edge sword,” said Jaworski. “There needs to be some accountability across the board, but no two communities may be the same.”

Local developer Dan Scanlon is looking into tiny homes as both a manufacturer and potential customer.

Scanlon spent 20 years in commercial construction, and never thought he’d return. “But when I saw this company, and I met the guys, they’re really interesting go-getters that have a lot of fight and entrepreneurial spirit.”

Scanlon pointed out that the building codes needed to construct homes vary from state to state and country to country. However, these tiny homes are “catered to meet all of those standards,” which will make construction easier down the line.

Scanlon will be raising money for the Canadian company, as well as investing. He also said he’s going to help secure a facility, licensing, vendors, and employees. But as interested as he is in the manufacturing side of tiny homes, Scanlon also plans to be a customer.

He likened living in a tiny home to living on his boat, which he does for a few months every summer.

“These houses can fit on land that’s typically not suited for dwellings,” said Scanlon, who is hopeful that planning committees in East Greenwich and Warren, where Scanlon is planning on constructing tiny houses, will work with the unique circumstances.

The tiny houses that Rohe produces are a little more complex than the tiny homes offered by House of Hope.

The Rohe tiny homes look like fancy shipping containers on the outside, but fold out to reveal a 400 to 800 square foot structure. The company calls these the Lotus Homes, which “bloom on site with little site disturbance,” according to the company’s website.

Each home can be transported in a variety of ways including trailer, barge, or even helicopter.

The “core” of each tiny house contains the electrical and plumbing infrastructure, while the sides that fold out are the living areas and bedrooms. If the owner of the tiny house wants to add on extra rooms or an addition, all they would simply do is, quite literally, snap another tiny house onto the existing one. The modular-style of the homes is unique, and Rohe’s mission is to make the modular housing design the standard of future housing.

Another unique feature to the Rohe tiny homes is their ability to be completely self-sustainable.

“Off-grid homes can be an expensive option due to the costs associated with getting materials and labor to your site,” according to the Rohe website. “The Lotus home avoids these issues thanks to its folding nature.”

Each home is manufactured in a controlled facility and folds up for transport. The off-grid homes feature water pump, solar panel connectivity, and compostable toilet. The Rohe website features picture of tiny, off-grid homes perched on pylons, giving homeowners the option to forgo a foundation if they desire.

“This is interesting stuff,” said Scanlon. “Is it small? Oh heck yeah it’s definitely small. But the way they’re designed, it just makes sense. Every square inch has a reason.”

Rohe bills their Lotus tiny home as “a great way to expand your living space” by providing “a means to better use the space already available on your property without breaking the bank.” These tiny homes start at about $125,000 and increase based on square footage, amenities, and additions.

“It’s very similar to building a boat,” said Scanlon. “Where in the factory, you’ll have assembly and sub assemblies in each corner, so to speak. Then you’ll just have one main assembly line and can say ‘Hey, I need a bathroom over here or a kitchen over here.’”

Each home takes eight to ten weeks to construct in a factory, and is then delivered to the site and set up within seven days.

“I think there’s always going to be a case for larger houses,” said Scanlon on the future of housing design. “But I don’t know one person that isn’t looking to buy a big house right now. And maybe it’s my demographic, because we’re done having kids, and we’re looking to downsize, but there’s nothing on the market right now. I think it’s going to scratch an itch that is not being scratching right now.”

Scanlon pointed out Briarwood Meadows apartments in East Greenwich. “You look over there at these one bedrooms they have, and they’re getting $1,500 or $1,700 a month. And all you’re doing is renting something a little bit bigger than this and in some cases the same size as [the tiny homes]. And there’s no home ownership.”

Scanlon suggests that for homeowners looking to build their credit or equity, living in a tiny home with the same square footage as an apartment would be a wise option.

According to Scanlon, the target audience for the Lotus tiny homes would be a couple or single person looking for a starter home or to get into homeownership.

Scanlon says he could see himself living in a tiny home, but would need a two-car garage at the very least.

“These facilities, these homes, they all have HEPA filters, they all have new non-mold supporting materials, no lead paint all that fun stuff you’d see in your other rentals. It’s efficient, it’s warm, it’s safe,” said Scanlon. “With other houses, there’s the stress factor of wondering if the boiler in the basement is going to go, when does the oil guy come. There’s a level of anxiousness that surrounds home ownership, and this is a way to reduce or almost eliminate it.”